Between the end of  the 2016 Milpirri Festival and prior to leaving  Lajamanu we visited Emu water hole just outside Lajamanu. The waterhole was full  and it in a  Tanami desert-scape of sparse vegetation ( spinifex, desert oaks, acacias and mulga trees), blue skies and strong sunlight.   The history of the desert  is one of a  ice gre around 20,000 years ago,  which retreated around  11,000 years ago and the rangelands  emerged.  That shift  to an arid zone is a climate change event.

Desert in Australia  traditionally means unsuitable for pastoral undue to the sandy soils that are deficient in nutrients  and the spikesy spinifex grasses that are unpalatable to stock. 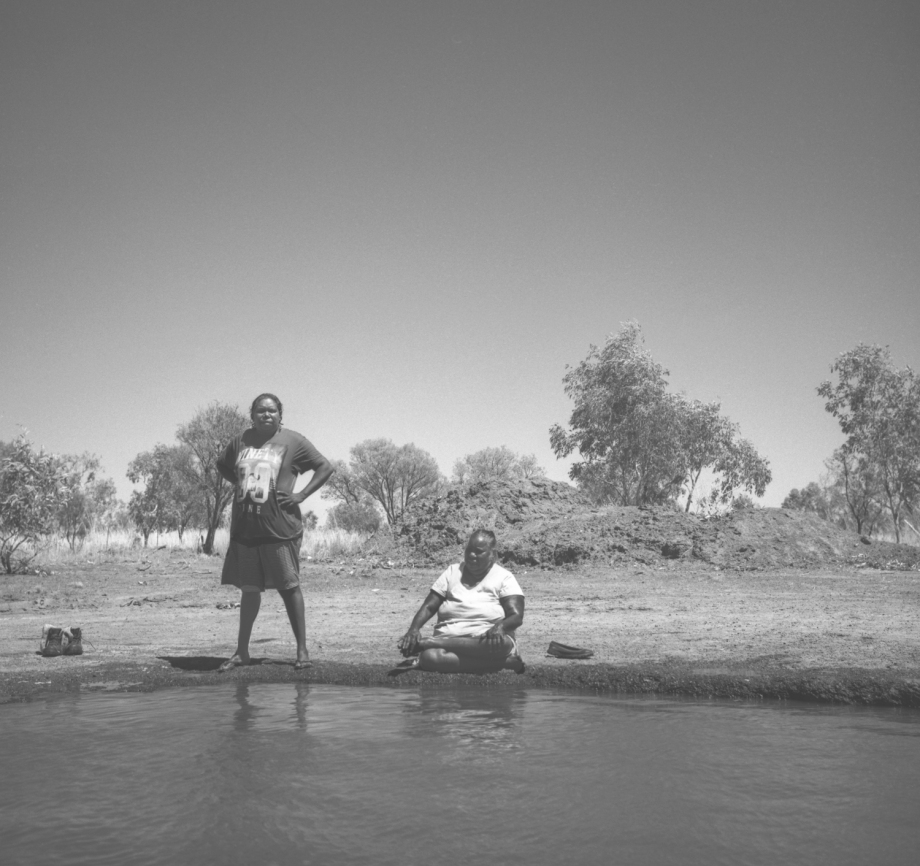 The Warlpiri have  extensive knowledge of water sources  in  the flat terrain  in their dreaming stories, their vocabulary has names for  different types of transient or permanent waterholes (e.g, rock holes, soakages)  and they  pass their  knowledge about water holes and food tracks on through dance and paintings. I started to decode these paintings whilst at Lajamanu —I got as as far as circles for waterholes, lines for journeys, half-circles for people.

After spending time at the waterhole we  burst  a tire looking for bush food,  and we spend several hours in 40 degrees heat changing the tire due to a lack of tools in the Landrover. They were sitting a trailer back at Lajamanu, as we were were only going for a short ride.  We relied heavily on the water that were carrying.

Arid and semi-arid desert lands make up 70 per cent of mainland Australia – a total of about 5.3 million square kilometres. There are ten major Australian deserts ranging from the Great Victoria Desert, through the Great Sandy, Tanami, and Simpson Deserts, to the gibber stone deserts of the Gibson, the Sturt Stony Desert, and the small Pedirka Desert. The flat terrain promotes a semi-arid climate, as any moisture from rainfall perculates quickly through the upper strata of sandy soil. The Great Victorian Desert  lies  south of the Tanami,   the Great Sandy  Desert is to the west of the Tanami whilst  the Gibson Desert is to the south west.

Floods are the rule rather than an exception, with the rapidly running water scouring the water channels and carrying away large amounts of soil.  The intermittent nature of the river flows in arid areas means there are large amounts of unconsolidated debris deposited along the length of the streams. The creeks and rivers  tend to rise rapidly after rain, and fall just as quickly when the rain stops, because these water courses experience flash floods when heavy rain falls upstream, often hundreds of kilometres away.

The rivers drain inland and often end up in ephemeral salt lakes. An  example is   Sturt Creek,  which flows in Lake Gregory or Paruku, that lies between the Tanami and the Great Sandy Desert. Paruku is among the oldest-known inhabited sites in Australia–approximately 47, 000 years ago– and its history from the pastoral expansion into the southwest Kimberley  in  the late nineteenth century is known by the Indigenous owners of the Sturt Creek  basin  as the killing times. The process of colonisation  and pacification was characterised by violence, chaos and the marginalisation of the Aboriginal people from their country. The Sturt Creek Massacre of 1922 is part of this history, although there are  many unrecorded killings in this region, as the pas toralists asserting exclusive proprietorial rights to all of the land and water resources.

Variability and unpredictability   are the normal climatic conditions (of rainfall and temperature) in the Central Australian deserts, which sit on a bedrock of ancient continental plate that is close to 3.5 million years old.   The deserts  are  places where the nutrients in the sandy soil have been washed off, blown away and resorted countless times.  Though the current deserts are places of of general scarcity (they are low in phosphorous, nitrogen and other elements needed to sustain life) there are also niches of local richness.