The common interpretation of  the frontier wars between settler Australia and the Aboriginal people is that this history is  a case of a doomed hunter-gatherer people unable to withstand the agriculture, animal husbandry and machinery of modern capitalism. This downplays the history of  the killing phases, segregation-by-incarceration phases, assimilation or absorption- to-the-point-of-disappearance phases, and  the  erasure-of-their- presence phases.

Currently, the aboriginal people in Northern Territory and Lajamanu are governed under an ‘emergency intervention’ initiated under the Howard Coalition government 2007 and continued under the Rudd and Gillard Labor federal governments, then the Abbott/Turnbull  Coalition government. This involves sending in civilian task forces (largely untrained in this work), and the military (even less qualified) ‘to save the children’ from reported child abuse, sexual molestation and neglect. The predators are  now seen as  the Aborigines themselves.

This is Henry Jakamarra Cook and one of his sons reading Judith Crispin’s recently published book, The Lumen Seed,   which includes a number of Henry’s stories: 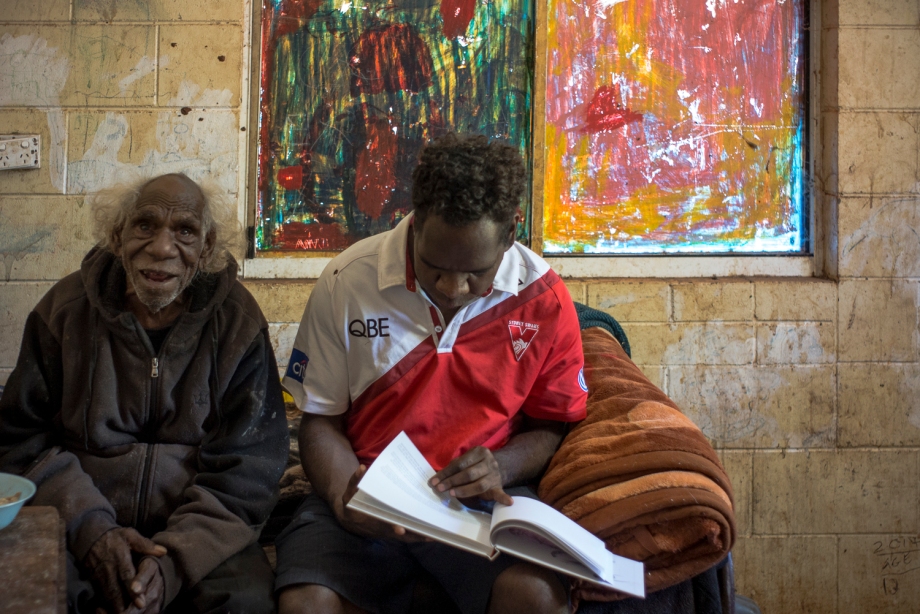 This intervention involved the suspension (and therefore the protections) of the federal Racial Discrimination Act and the Northern Territory’s anti- discrimination legislation. That  suspension was revoked and the Act restored on 31 December 2010. The intervention, however, l involves the suspension of the permit system which allows Aborigines to decide who can enter their domains; the search for sexual predators; the quarantining of all social welfare payments; the physical medical examination of children; and the banning of alcohol. Legislation in 2011 ensured that social service payments would be tied to school attendance.

Evaluations of the intervention has shown  some positive outcomes to date, notably the reduction of alcohol-fuelled pressures by young males on women to hand over their food money. But  there is still a governmental philosophy of blanket ascription — that is, any instance of deviant behaviour by an individual, a group or a community is considered the behaviour of all Aborigines, and all must surrender to a national or state ‘remedy’.

The past is omnipresent. A white settler history with its  doomed race mentality; the disdainful and denigratory views of the native peoples generally; the hostile indifference to their lives, rights and values; the Aboriginal remoteness; the relative absence of trials and judicial inquiries; a general disregard or contempt for the  experience of the Aboriginal people, the closed nature of Aboriginal administration, at least since the late nineteenth century; the resentment  of Aboriginal opposition and resistance to their  brutal treatment; and the view that it is time to move on from the past and to turn the page.